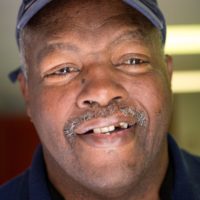 Mr. Larry McDowell presented to our office for a consultation on the afternoon of Thursday, March 17, 2016. When Mr. McDowell arrived, he needed to be guided by holding on to someone in order to get places in the office; he will need to bring someone with him who can assist him in walking as it is a liability for the office staff to physically guide him themselves. Mr. McDowell will also need assistance in going over treatment, signing paperwork, and etc.

We Apologize for Any Inconvenience.

When Larry McDowell went to Affordable Dentures in West Palm Beach, Florida, to have a dental procedure on March 17th, there was no reason that he could possibly believe that he wouldn’t be able to get the same services as anybody else.  But once Mr. McDowell reached the front desk, he was directed to follow someone to the examination room. Mr. McDowell then said, “I’m blind, could you help to where I’m going?” The employee at the desk said nothing. Once a member of the office staff arrived, Mr. McDowell asked for assistance to the examination room – Mr. McDowell asked to hold her elbow.

She said, “No. We can’t help you unless you have someone to help you. We can’t treat you unless you bring someone to assist you.” Mr. McDowell then asked to speak to the dentist. When Mr. McDowell asked where the dentist was, the employee replied that he was in surgery and would be there for the next two hours.  A patient who was watching the interaction told Mr. McDowell, “No he’s not. He’s standing right there.” After the patient’s remark, the employee said to Mr. McDowell, “The dentist doesn’t want to speak to you today.”

Mr. McDowell requested Affordable Dentures to email a copy of written reason to his sister, and they sent the above letter.   It was then while Mr. McDowell was waiting in the office, an employee approached him and informed him he could not wait inside the office any longer and must leave, since the dentist would not be seeing him today—with the knowledge that Mr. McDowell had taken public transportation.

Nothing in all the world is more dangerous than sincere ignorance and conscientious stupidity.

Larry McDowell’s needs were basic human needs, and the outright denial of such services based solely on his disability transforms him, in the eyes of this medical provider, into a human who is not worthy of basic services.  Mr. McDowell is a man who has transformed his life to assist others.  He is a member of the National Federation of the Blind and is currently the  President of the Braille Club of Palm Beach County.  The Braille Club of Palm Beach County organizes social activities and weekly meeting among the blind and visually impaired community in Palm Beach. In his free time, Mr. McDowell seeks to live an ordinary life filled with friends and outings.

“Aside from the public health issues that most racial/ethnic minorities face, minorities with disabilities experience additional disparities in health, prejudice, discrimination, economic barriers, and difficulties accessing care as a result of their disability—in effect, they face a “double burden.”[1]   “Disability-based discrimination in health care is illegal under the Americans with Disabilities Act and will not be tolerated,” said Eve L. Hill, Deputy Assistant Attorney General for the Civil Rights Division at the Department of Justice. “All types of health care providers – from hospitals to nursing homes, from surgeons to general practitioners – all across the country – need to provide equal access to people with disabilities, including people who are deaf…, the time for compliance is now.”[2]

Notwithstanding the fact that the ADA is over 25 years old, it is common-place that medical professionals, who are dedicated to the health of their patients, are too often dismissive of their patient’s disability-related needs.  Most discrimination against persons with disabilities are not so blatant and ignorant as what occurred with Mr. McDowell.  Some of the issues which serve as barriers to persons with disabilities include inaccessible physical environments, and inflexible policies and procedures that, for example, assume that everyone must be able to independently fill out forms, undress unaided, transfer to high examination tables, and communicate in spoken English to receive standard health care services.[3]

The failure to provide accommodations and an accessible environment will, at the least, lead to health care disparities, and at the worst, lead to injury and death.

The most common issue at Disability Independence Group is doctors and hospitals that refuse to provide sign language interpreters for people who are deaf. Instead these professionals choose to communicate in English by writing notes or using technology that fails to work accurately and timely.  This leads to miscommunication and does not allow the deaf patient to have the full opportunity for medical choice as any hearing person would expect. This failure to communicate leads to misdiagnosis, failure to take the appropriate medicines, and continued illness.  When it comes to psychiatric treatment, it often exacerbates the symptoms. Other issues that often arise are as follows:

However, the main issue is the fact that because of the difficulties that persons with disabilities encounter, such persons are less likely to receive needed health care.  According to a Disability Healthcare Access Brief published by the Disability Rights Education and Defense Fund, 19% of people with disabilities reported that they did not receive medical care needed in the previous year, compared to 6% of non disabled persons.[5]

People with disabilities tend to be in poorer health and to use health care at a significantly higher rate than people who do not have disabilities.  Larry McDowell is not a statistic, but instead a blatant example of an issue which needs to be addressed.  Equality in health care is not a benefit, but a basic right.