A six year old’s fight to have his seizure dog at school. 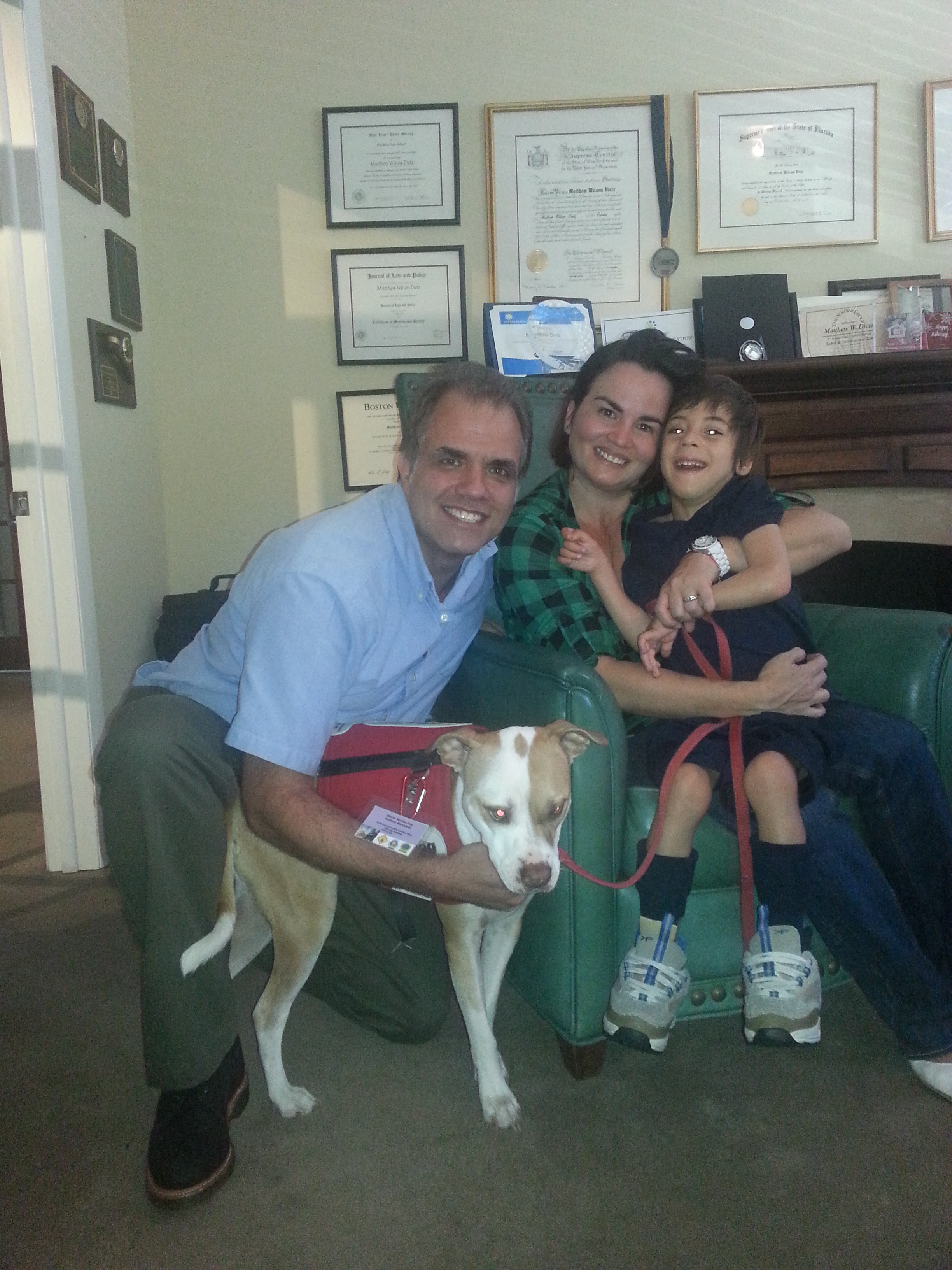 Disability Independence Group filed a federal lawsuit against the Broward School Board, alleging the district discriminated against Anthony Merchante, a first grader, for imposing too many barriers to bringing his service dog to his elementary school. Anthony Marchante lives with cerebral palsy and is highly prone to seizures. His medium-sized terrier service dog, Stevie, alerts others to oncoming convulsions and helps calm the boy by licking his face. Anthony’s mother, Monica Alboniga said the district at first denied Stevie access to Nob Hill Elementary in Sunrise this year, demanding that she provide liability insurance for the dog and additional vaccinations that did not exist. Stevie was prescribed by Anthony’s neurologist at Miami Children’s Hospital and is part of Anthony’s treatment protocol. In order to be a service animal, the dog must have a temperament that allows it to stay focused on its job. Any dog that would be a direct threat to others would not be a suitable service animal. There cannot be insurance requirements or other conditions that a governmental entity or a public accommodation can place on a service animal. When Anthony’s mom initially brought this matter to the press and requested help and obtained publicity, the school board relented, and allowed Anthony to go to school with his service animal. Then, the School Board shifted tactics and demanded that Monica provide a handler for the dog since the child was not capable of doing so. Monica was required to go school every day just to care for Stevie but she was not allowed to help her son with any other activities. As a service animal, Stevie is trained to stay with Anthony and is constantly tethered to Anthony’s wheelchair, and does not eat or poop during the school day. Since it is legally required under Florida and Federal law, the Broward School Board is allowing the seizure alert and protect dog, but refuses to include the dog in Anthony’s care plan, and maintains that it has no duty to provide a handler for the dog as it disagrees with the medical prescription of Anthony’s neurologist. The Board maintains that caring for the service animal is a “personal service” of which it has no duty. However, as a child with a disability, the school board provides services from feeding to toileting for Anthony, but it considers tethering and untethering a dog from Anthony’s wheelchair is a “personal service” that is more of a burden than feeding or toileting Anthony. Further, even though Stevie was prescribed by Anthony’s neurologist, the School Board contends that this prescribed service is not necessary. However, Anthony’s care plan includes the insertion of a Diastat suppository in the event that Anthony has a seizure, but not the services performed by the dog.
Ms. Alboniga’s suit, filed last month, claims the district is violating the Americans with Disabilities Act and The Rehabilitation Act by implementing excessive procedural hurdles. She’s asking the district to amend its policies and ensure that she and Anthony are not forced to fight this matter throughout the rest of Anthony’s schooling, which may last until he is 23 years old.

All cases are dependent on many factors that may or may not be present in all cases. As such, results may not be typical. You may not have as beneficial a result.