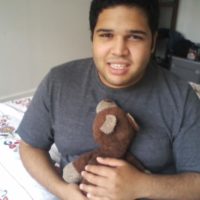 This month, Officer Jonathon Aledda will be tried for the shooting of Arnaldo Rios-Soto, an Autistic, Hispanic man, and his caretaker, Charles Kinsey, an African-American man.  The shooting on July 18, 2016, captivated the nation when a video showed Arnaldo Rios-Soto playing with a toy truck in the middle of the street, and Charles Kinsey lying with his hands and legs in the air, pleading with the officers. As a disability advocate, and as Arnaldo Rios-Soto’s lawyer, the trial of Officer Aledda is a watershed moment.  Will Arnaldo be deemed to be inherently dangerous because he is different?  Will there be a stereotype that because Arnaldo lives with a developmental disability, the fact that he was targeted was justified?  I hope not.

On July 18, 2016, in North Miami Florida, a bystander saw Mr. Rios-Soto and Mr. Kinsey running down the street, and reported to 911 that a mentally ill person who may be suicidal with a gun in the middle of the street.  The Miami-Dade Police Dispatch conveyed the following message “a suicidal person with a gun to his head in the middle of the roadway.”  Within two minutes, North Miami Officer Berneadeau and Officer Crespo arrived at the scene armed with assault rifles and demanded that both men get on the ground and put their hands in the air.

Immediately, Mr. Kinsey complied with the officer’s commands, but Mr. Rios-Soto did not understand what was happening and was smiling, sitting in the middle of the street, playing with a toy truck.  While lying supine with his arms up, Mr. Kinsey attempted to calm Mr. Rios-Soto, and attempted to assist him to comply with the officer’s commands, all while screaming to the officers — “What he has is a toy truck in his hands. A toy truck. That’s all it is. There’s no need for guns.”  This was repeated three to four times.  Mr. Kinsey was shouting that he was a behavioral therapist and working with Rios-Soto, who had autism and that Rios-Soto was holding a toy. 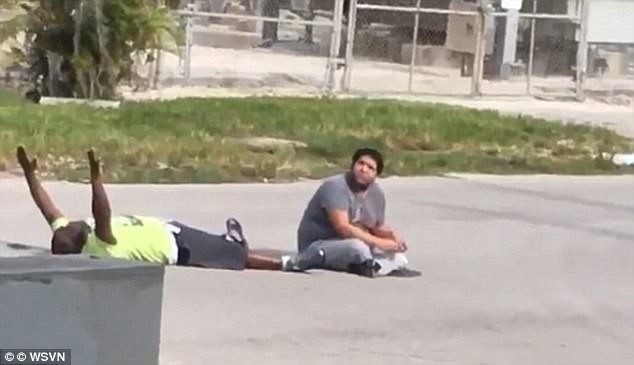 Within five minutes, other officers arrived and a command station was set up further than where Officer Bernadeau and Officer Crespo were positioned, who were about 20 feet away from Mr. Kinsey and Mr. Rios-Soto. Officer Bernadeau announced over the radio that Mr. Kinsey was indicating that the object was a toy car.  Then within a minute, Officer Bernadeau confirmed his statement, and stated “I have a visual.  Does not appear to be a firearm. Have units QRX [standby].”

At the time when Officer Bernadeau clearly stated that it was a toy, Officer Johnathon Aledda was 152 feet away from Arnaldo Rios-Soto and Charles Kinsey, balancing his Colt M4 Carbine Semi-Automatic Rifle over the hood of a vehicle, aiming at Arnaldo Rios-Soto.  From that distance, Officer Aledda’s partner, Officer Warren, could see that Mr. Rios-Soto was playing with something in his hand, but could not make it out. The officers recognized that the behavior that Mr. Rios-Soto exhibited was not normal, and that Mr. Rios had a mental disability or mental health “issues”. According to the Sergeant, Mr. Rios-Soto looked like he was just in his own world, doing his own thing, oblivious to the armed police around him.

Officer Bernadeau and his partner were beginning to approach Charles Kinsey and Rios-Soto where they were on the street, as there was no apparent danger as there did not appear to be a firearm.  However, while Officer Bernedeau and his partner approached, Johnathan Aledda shot three separate rounds from his rifle at Mr. Rios-Soto. One round hit Charles Kinsey in the leg, and his blood splattered on Rios-Soto and Mr. Kinsey screamed in pain. Mr. Rios-Soto stood up and began to yell and scream.

Charles Kinsey and Arnaldo Rios-Soto were treated like they were the criminals.  Mr. Rios was handcuffed and taken into custody.  During this time, Arnaldo was compliant with the officer’s direction and was talismanicaly repeating to himself, “Minnie Mouse, Minnie Mouse.”   Notwithstanding their actual knowledge of Mr. Rios-Soto’s lack of any capacity to provide a statement, Arnaldo Rios-Soto was interrogated.  Mr. Rios-Soto was brought into the police station in handcuffs and was subject to an interview for three and one half minutes.  During the interrogation, the questions asked were solely being used to intimidate and coerce a confession from person who was knowingly and legally mentally incompetent, Autistic, and intellectually disabled.  The interrogation ended when Mr. Rios-Soto could not adequately respond to questions other than in the affirmative or by echoing the question.  The video of the interrogation is here.

Once Arnaldo Rios Soto arrived back at his group home – MACtown, he began to attack the staff, other residents, and had major behavioral problems.  Soon thereafter, he eloped from the group home to the scene of the shooting.  He beat the ground where the incident occurred with his fists and shouted “Police Shoot”, “Police Shoot.”   He was thereafter institutionalized at Aventura Hospital Psychiatric Ward for 34 days.

Neurodiverse does not mean dangerous.

It is not unusual for police officers to assume that persons with intellectual or developmental disabilities pose a danger. In the past few years, the North Miami police officers have institutionalized over 10,000 people when an officer felt was a danger to themselves and others.

In 1996, the Baker Act was substantially overhauled to stop the inappropriate commitment of frail elders and others who could not benefit from psychiatric treatment, in addition, the statutory definition of mentally ill is clear to exclude those whose acts are based in cognitive or developmental disabilities from being subject to arrest and involuntary examination for acts related to their disability.  Notwithstanding, North Miami has committed over 10,000 persons to involuntary commitment in psychiatric institutions the past ten years.

The policies of the City of North Miami do not define a mental illness for purposes of involuntarily committing a person. As a result, on a yearly basis many persons who would not be subject to commitment are frequently brought to a psychiatric facility, when such facility can only do what they did for Mr. Rios-Soto – use psychotropic drugs and sedatives to place him into a compliant state until the 72 hour period ceases.

Because the failure to distinguish between developmental disabilities and psychiatric conditions, and the assumption that persons with any type of neurodiverse conditions were inherently dangerous, North Miami would automatically remove people with disabilities from their residences, group homes, or nursing homes when called for behavioral issues.   Pursuant to policy, these removals are done in handcuffs.

How can you tell if Arnaldo Rios-Soto has been harmed?

Arnaldo is Autistic and lives with an intellectual disability and is technically “non-verbal.”  The extent of his speech ability is to state selective words, repeating lines from his favorite movies or television shows (scripting) or parroting phrases said in conversation (echolalia).  This vocal perseveration is a common self-soothing mechanism exhibited by individuals diagnosed with autism. He conveys his wants and needs largely by leading and showing; fear and distress are displayed by feral screaming, grunting, and crying. He also does not understand that he is a large man, and has meltdowns and behavioral issues, and at such time, he may hit or bite.  When he demonstrates an unacceptable behavior, behavioral reinforcements are used to reward positive behavior or disincentives negative behaviors.

He had several of his favorite movies that he frequently scripts, and those movies play in a loop in his brain, and since the incident, the loop that plays in his brain is the shooting in North Miami.  The sound bites or continuous feedback loop in his head is no longer the familiar, happy play back from a cherished Disney movie. It is not Mater’s voice from Car’s he hears, but rather the flashback of the shooting in North Miami. His brain plays the horror film in his head just as it does for the combat soldier suffering with PTSD.

Increases in gross motor agitation are present; rage, tantrums, and pacing are common. Increases in stereotypic or self-soothing responses are evident as is a deterioration in social functioning. There is an exacerbation in problem behaviors indicated by negative changes in magnitude (i.e., increases in frequency and duration). He is easily startled and quickly responds to triggers (i.e., television programs with policemen) another shared response with others individuals with PTSD. Mr. Rios-Soto has a great deal of difficulty sleeping at night. The resulting frustration and trauma manifested itself in increased behavioral problems which made both treatment and housing without many services almost impossible.

What happened to Arnaldo Rios-Soto?

The only adequate placement at the time was Carlton Palms Educational Center, a residential facility for persons with intensive behavioral needs. At the time, Carlton Palms was the only available intensive residential facilities in the state. However, when Arnaldo would engage in manifestations of his PTSD,  he would be subject to physical restraint.   Contrary to best practices of trauma informed care, the frequent use of restraint intensifies and caused Arnaldo to relive the trauma that he experienced in North Miami. Thus, triggering flashbacks of the shooting (i.e., negative feedback loop) in his mind.  As a result of their difficulty, Carlton Palms demanded additional funding from APD to have sufficient staffing for Mr. Rios-Soto, or discharge him.  Because of the failure to get all of the funds needed for his care, Carlton Palms has stopped attempting behavioral modification to Mr. Rios-Soto.

When Arnaldo Rios-Soto got a hold of a razor blade at Carlton Palms Education Center and shaved off his hair without being noticed.  After this event, he was transferred to an Attain Group Home in Orlando.    In his new group home, with the intensive individualized services he is receiving, he is adjusting better, and over time, his behaviors will lead to a fading of the necessary services, however, unlike a neurotypical person, there is no way to eradicate the loop that plays in his brain of the shooting in North Miami.  He currently has one to two staff persons assigned to him in the event that he becomes agitated at all times.

The Trial of Officer Aledda

Persons with developmental and intellectual disabilities should be able to live in their family homes and in their community without fear.  Arnaldo Rios-Soto was sitting in the middle of the street playing with a toy truck, and an officer who knew nothing of Arnaldo Rios-Soto, other than he may have some “mental issues,” from 152 feet away, attempted to kill him.  Anyone with a basic knowledge of a person with Autism should have understood that the stimming behavior was typical of a person with autism, despite the fact that his caretaker was lying supine next to Arnaldo screaming it’s a toy and he was a caretaker. The only sign that was missing was a neon sign flashing “this is not a threat, he is a human being.”  Assumptions and stereotypes are dangerous.  These assumptions that this was a threat leads to the institutionalization of a human being, lifelong trauma, and tearing a family away from their home.