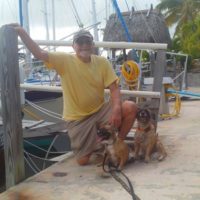 Raymond  Bishop was shot and killed on February 12, 2018. He was 84 year old Marine who had five adult children and two dogs, Roxie and Ranger.

On that day, Miami-Dade Police were called to his apartment in Homestead Florida. His social worker reported to the  police that Mr. Bishop was despondent because he thought that he, and his two dogs, were going to be forced out of his home.

I am in full control of all cognitive functions. However, I am incapable of keeping myself & my very precious friends, Ranger & Roxie, in reasonable comfort and good health. My age does not frighten me, but for ten years have been 24/7 dizzy, with surges of vertigo. Since November 2019, when my left eye was blinded in surgery, I have been in steady decline. My right eye has been hemimorphic from strokes- its other half occluded by cataract. Unable to drive or to shop for our needs, I am incapable of accident-free food preparation, and now, I have EPSTEIN-BARR.  There being no place that we, three – Ranger, Roxie & I can go together. They deserve my full-care while they live, having saved my life countless times when I stop breathing in my sleep. … 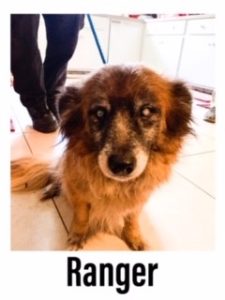 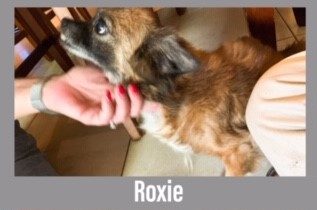 Ranger and Roxie were Raymond Bishop’s constant companions.  Ranger is a 20 pound senior dog who is blind, and Roxie is a 13 pound senior dog that is deaf and walks on three of her four legs.  Mr. Bishop would tell all that he adopted Roxie and Ranger in Honduras in 2012, where these dogs saved his life, and how they continue to save his life because of his sleep apnea.   He also suffered from a physical disability and mood disorders, and he needed the animals, they gave him reason for living, they were his emotional support animals.

On June 23, 2017, Mr. Bishop’s blind dog, Ranger, slipped off her leash to play with a dog of another tenant, Luna, and began to bark at this dog.  Mr. Bishop attempted to run after the dog, but because of his disability, he was not able to timely restrain the dog.   The owner of Luna extended her leg at Ranger while she was barking.  She asked the property manager who the owner of Ranger was, and went to see him.  She wanted to know if the dog had her shots, and showed him her leg what had a small, pimple-like, mark, and a light scratch and told him that she was ok.

However, that same day, Mr. Bishop’s landlord served him with a Notice of Non-Compliance and seven day notice to cure, and demanded a pet fee of $400, a monthly pet fee of $20 per pet, and that Mr. Bishop immediately have Ranger leave the premises.  Raymond Bishop immediately went to his psychologist and social worker at the VA hospital who provided him with documentation about Mr. Bishop’s disability and his need for his emotional support dogs.  Despite his attempts to tell his landlord that he needed his two dogs, the property manager called Ranger, this senior, blind dog, a mad dog.  His landlord filed an eviction action against him on July 26, 2017.

Mr. Bishop went to Legal Services of Greater Miami, and attorney Chris Brochyus immediately recognized that a property owner cannot evict a man with a disability from his home because of his assistance dog and filed a counterclaim counterclaim to the complaint, asserting Raymond. Bishops’ rights under the Fair Housing Act as a person with a disability.

The thought of losing his home and his dogs weighted on Raymond Bishop.  He was hopeful that the matter would be resolved at mediation in October, but it was not, and the property manager continued to try to push him out.   In February 2018, Raymond Bishop was concerned because his lease was due to expire on February 28th, and he did not know where he would go after the lease expired. He spoke with the property manager and was advised that notwithstanding what occurred in the eviction, that the landlord was not going to renew his lease and he would need to find a new place to live. Mr. Bishop knew that he would not be able to do so.

He started giving away his prized tropical fish in preparation of his death, and was visited by his social worker from the VA.  He advised his social worker that his lease was not going to be renewed, and that there was nowhere he could live with Roxie and Ranger.  He told her that he was going to shoot Ranger first, as Roxie was deaf, then shoot Roxie, and finally shoot and kill himself.   Upon hearing this, Mr. Bishop’s social worker called the police and reported this pursuant to VA protocol.  The police arrived within six minutes, and four minutes thereafter, Mr. Bishop was shot five times.   Both dogs survived and a friend of Raymond Bishop immediately went to pick up Roxie and Ranger, as senior dogs with disabilities, there would be no question that they would be destroyed.  They were adopted by Mr. Bishop’s friend.

Emotional Support Animals are no Laughing Matter and are a Right under Federal Law.

There is a current controversy about whether a tenant is lying when claiming that their animal is an emotional support animal.  As such, landlords or condominium associations often ask invasive questions and attempt to disregard these animals as a necessary element for a person with a disability to live and use his or her home.   In this matter, this premises allowed pets, so no disclosure of the tenant’s disability was required.  However, when Mr. Bishop needed an accommodation not to be evicted from his home because of his assistance animal, he was protected by the Fair Housing Act.

Part of the reluctance was that he did not ask for the accommodation until he was cited due to his dog’s behavior.  However, under the Fair Housing Act, a discriminatory denial can occur at any time during the entire period before a tenant is actually evicted.  As such, a request for an accommodation can be made at any time short of the eviction order itself. As a general rule, a reasonable accommodation defense is available at any time before a judgment of possession has been entered, if the other requirements of the defense are me.  As soon as the landlord had knowledge of the disability and need for accommodation, it was the obligation of the landlord to do a limited inquiry of the necessity of the need for accommodation and the individual’s disability.

A landlord can deny an accommodation where the animal creates a verifiable direct threat to safety and property.  However, it cannot be based on assumptions or stereotypes.    While a small, blind, senior dog would not be considered a threat to anyone, the law also provides that the direct threat cannot be lessened by another accommodation.  So even if Ranger was deemed to be any threat, a better leash could have been provided so Ranger would not escape.

This was a tragedy that could have been prevented.