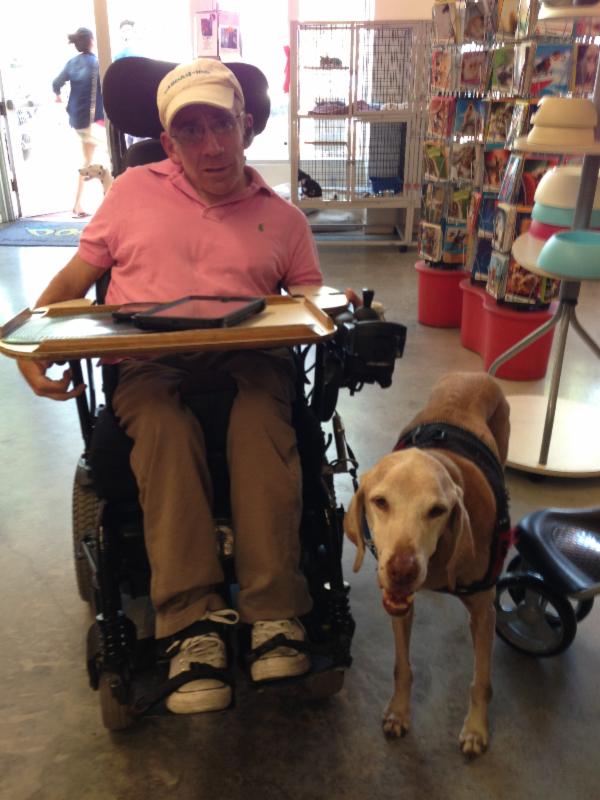 Inside a body askew, I ambulate electronically atop four wheels. Alone, I often draw stares as something would from the extra- terrestrial. However, while He prances gleefully by my side, His inviting allure draws a smile from even the most stoic of faces. While as organic as I, He exudes a spirit almost God-like in nature that can be felt by all open to receive it.

Tangibly joined by chain, intangibly joined by all five senses and a sixth; together, we amble through life as one. Apart, we flail aloft as two naked appendages lopped at the soul. Whether about to embark on trundle or slog; I have Him at my side loyally awaiting my every move. With snout held high and ears flapping in the wind with super-hero air, He defies all who question His purpose.

As we end our day, He jumps on my bed and follows by a flick of the tongue on my cheek and bids me a sweet good-night. Curled at my feet, He falls asleep. I wake in the middle of the night to the sounds of His slumber as He dreams the simple dreams of His kind. With a soul as innocent as a three-year-old but as old as the earth itself, He simply laughs off the crazy complexities we add to life. Down there from His perspective, He just doesn’t care. He’s simply a dog. The mighty equalizer.