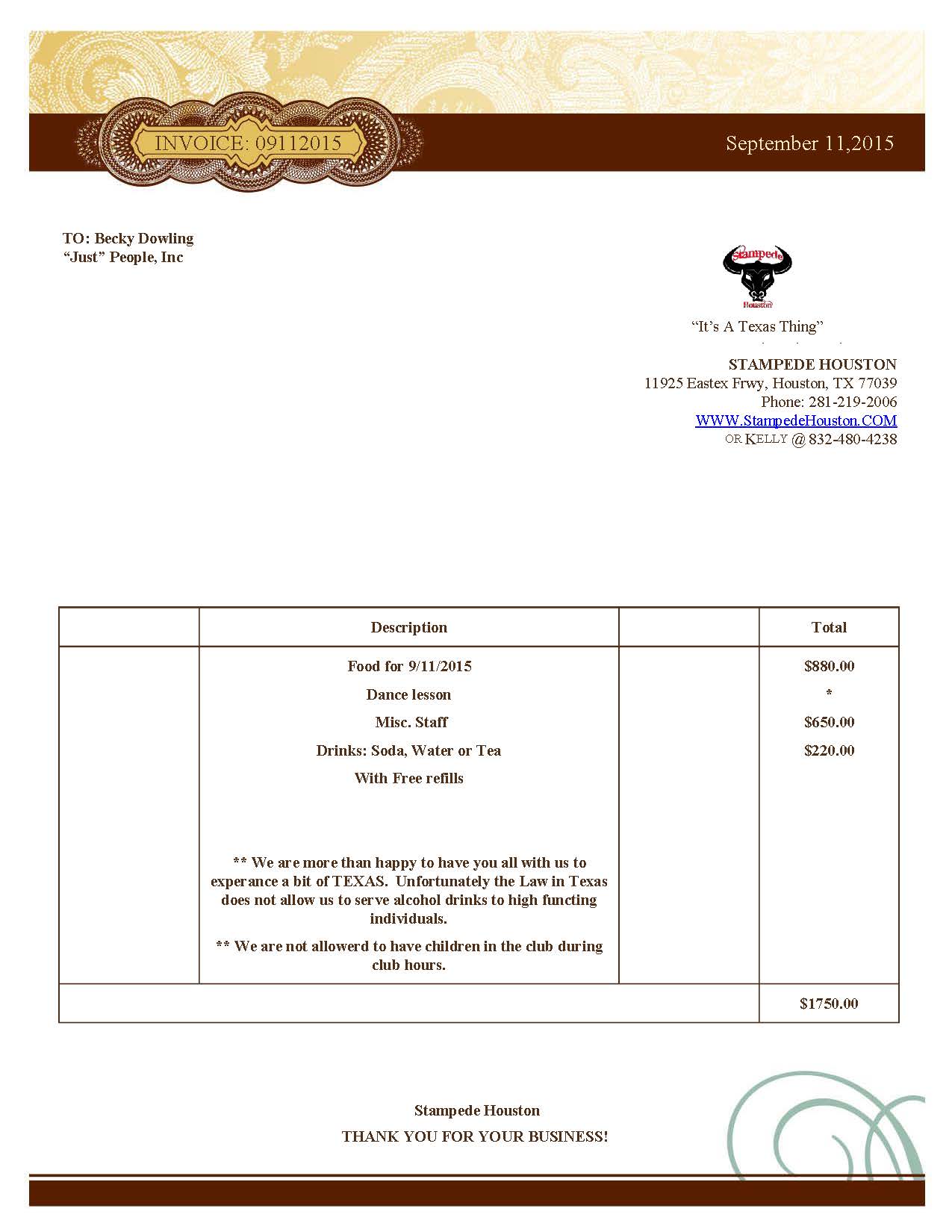 “We are more than happy to have you all with us to experance a bit of TEXAS. Unfortunately the Law in Texas does not allow us to serve alcohol drinks to high functing individuals.”
Kelly @ Stampede Houston

Becky Dowling runs a program in the Metro Atlanta area called “Just” People, which provides support services and housing to persons with developmental disabilities. These folks are what is considered “high functioning” and are able to do many activities of daily living on their own, and need some support services on a daily or weekly basis to assist them in living independently. As part of this program, “Just” people has a social component, where the participants in the program can do outings every weekend, from bowling and movie night to international cruises. The “Just” People community has been to eighteen cruises in the past twenty years.
So, it was not unusual for the “Just” People community to want to have a taste of some good ‘ole Texas hospitality, do a little line dancing, the tango with the mechanical bull, and down a few buds down in Houston Texas. So, director, Betty Dowling set up a trip to take 88 people in the “Just” People community to Houston to have a taste of Texas, and book a party at Stampede Houston.
They were told that they all were welcome down at Stampede Houston, and they’ll take their money and let them “experance a bit of TEXAS. Unfortunately the Law in Texas does not allow us to serve alcohol drinks to high functing individuals.”
All oxymorons aside, not only is this wrong, it violates the Americans with Disabilities Act. One of the stated purposes of the law is as follows:

In enacting the ADA, Congress recognized that physical and mental disabilities in no way diminishes a person’s right to fully participate in all aspects of society, but that people with physical or mental disabilities are frequently precluded from doing so because of prejudice, antiquated attitudes, or the failure to remove societal and institutional barriers. (ADA Amendments Act, 42 U.S.C. 12101(a)(2))

The most common form of prejudice and antiquated attitudes is the perceived infantilization of persons with disabilities, that persons with disabilities are perpetually childlike, innocent and vulnerable. People with disabilities should and could enjoy life, just like anyone else, including, but not limited to drinking, having a sex life, and even….having children!
The first time that I had a speaking engagement outside of Miami was at the University of Florida Disability Student Association symposium. Unbeknownst to me, it focused on disability and sexuality, and the keynote speaker was little person porn star, Bridget “the midget” Powers. I was invited to the conference by a student, Bethany Stevens, who is now a renowned disability sexologist. When I met this small woman in a wheelchair with a t-shirt that said “Gimp Pimp”, she was better versed in dildos that I was in discrimination. The remainder of the conference expressed the goal that whoever you are, whatever beautiful forms your body comes in, you can have enjoyable sex. I was truly out of my league. And as Bethany herself says, in her blog – cripconfessions.com – “Sexuality is a human right that EVERYONE is worthy of and EVERYONE can find someone to be interested in them.” So, infantilization is a pernicious stereotype. It is just made for able bodied persons to make them feel good about protecting persons with disabilities.
As for drinking, I find it hard to believe that a person with a developmental disability poses more of a danger than Texas citizens who exercise their right to carry a shotgun or a rifle in the open enjoying a few beers. However, Texas law does prohibit the sale of alcohol to some people, as follows:

Sec. 101.63. SALE TO CERTAIN PERSONS. (a) A person commits an offense if the person with criminal negligence sells an alcoholic beverage to a habitual drunkard or an intoxicated or insane person.

Now, there is no definition of “insane” person under this section, but the traditional legal test is whether or not a person knew the difference between right and wrong. That then begs the question, whether anyone after six beers can really be deemed sane (disabled or able-bodied). Maybe Stampede Houston needs a new lawyer….
Believe it, or not, Betty Dowling and the world travelers at “Just” People would like to still go to Stampede Houston on September 11th. If you think this is wrong, why don’t y’all go down to Stampede Houston and have some hooch and tango with the mechanical bull and give them a piece of your mind, or better yet, call them and tell them that they are wrong, and it’s time to stop treating persons with disabilities like children that they need to protect – they should worry more about drunk folks with guns.