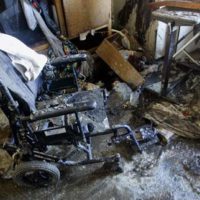 In times of disasters, most people focus on rebuilding, increasing accessibility for persons with disabilities does not register as important or necessary.  However, not only are accessible alterations required by law, they are frequently covered by most insurance policies as compliance with code or ordinance of law.  The failure to include disability related modifications is due to a lack of knowledge of the existence and requirements of modifications on the part of insurance adjusters.

Many insurance policies contain law and ordinance coverage, which is an additional coverage for property holders that pay additional amounts which may be required because of a requirement to comply with a law or a building code.  Two examples are as follows:

Policy Example 2: With respect to the building that has sustained covered direct physical damage, we will pay the increased cost to:

(1) Repair or reconstruct damaged portions of that building; and/or

(2) Reconstruct or remodel undamaged portions of that building, whether or not demolition is required; when the increased cost is a consequence of enforcement of the minimum requirements of the ordinance or law.

Most property insurance adjusters are aware of changes required by local code and while some local codes have accessibility requirements; however, most adjusters are not aware of the requirements of disability rights laws.  Further, accessibility updates may not be required when the damage is not over a certain percentage of the property.  Improvements required under the Americans with Disabilities Act, the Fair Housing Act, and Section 504 of the Rehabilitation Act are included within law and ordinance coverage, and when any element of property is altered, the alteration is required to comply with these laws.

Modifications for owners or residents of single family homes or apartments.

Under the Fair Housing Act, a resident in a property is entitled to have a necessary modification for his or her disability if the resident pays for the modification.  To the extent that a request is made under the Fair Housing Act, the requested modification is required by law.   However, when a property, or part of a property is destroyed, insurance should pay for the regular costs to replace the property, and the tenant is only required to pay the additional costs associated with the structural changes that would be over and above the cost of the original design.

Example 1:  The entry to a home was destroyed, and the home had steps, which were covered by a plywood ramp that the tenant used to enter or leave his home.  If the entry to the home was required to be replaced, the insurance company would be required to pay for a permanent ramp if it was the same amount to replace the existing steps and the plywood ramp.

Example 2:  A bathroom suffered extreme damages and needed to be repaired.  A lavatory with a removable base could be installed to provide increased maneuverability, instead of a fixed base cabinet.  If it is done at the same price, then there would no additional charge above the insurance.  However, if the bathtub needed to be replaced, and the tenant wanted a roll-in shower, the tenant would be responsible for the difference in the cost between a bathtub and a roll in shower.

It is important to note that the modifications are not limited to the residents, but also to family members, guests, or visitors who may need a modification for their needs as well.  The only caveat, is that for modifications to the interior of the premises, a renter may be required to pay to restore the element in the interior of the unit to its original condition, where it is reasonable to do so.  (It would be reasonable to remove grab bars, or a cabinet, while it would not be reasonable to narrow doors that are widened, or exchange a bath for a shower.)

The failure to allow for reasonable modifications by insurers may also subject an insurer to liability under 42 U.S.C. § 3605 and 24 CFR 100.70 for providing such insurance differently because of one’s disability-related needs.

Modifications for owners or managers of housing that receives federal financial assistance, such as HUD subsidized housing, public housing authorities, and student housing.

However, the obligations of a recipient of federal financed entities is not limited to when a natural disaster strikes. The property owner or manager has an obligation to modify the property at the request of a resident at any time, as long as the request is not an undue burden or a fundamental alteration.  However, in times of natural disasters, and due to the availability of financial assistance through insurance, a property manager may not claim undue burden for extensive modifications, such as installing a roll in shower, extended ramps, lifts, taking down walls or doors, replacing stoves or refrigerators, or the like.

Modifications for public accommodations, such as private businesses, stores, food service establishments, or places of lodging.

The Americans with Disabilities Act requires that all alterations comply with the standards for new construction under the ADA Standards for Accessible Design.  To the extent that a primary area is altered, the path of travel to the altered area and the bathrooms, and other elements must also be accessible. 42 U.S.C. § 12183.

For example, in 1998, a lightning bolt struck Mercersburg School in Pennsylvania and destroyed its roof and damaged units of its residence hall.  Mercersburg made a claim on their insurance policy to upgrade the damaged portion to comply with the ADA, and purchased additional coverage to demolish and renovate portions of the property to comply with the law.   The Court determined that the insurer was obligated to pay any post-fire renovations that “were mandated by the ADA” and did not require an official to enforce the law by issuing a citation — all that it required was evidence that the renovation or modification was necessary under the law. Regents of Mercersburg Coll. v. Republic Franklin Ins. Co., 458 F.3d 159, 171 (3d Cir. 2006).

To the extent that an area of the facility has not been damaged and covered by insurance, the entity would be responsible to remove architectural barriers where the removal of such barriers is readily achievable. This is a lower standard than the requirements than what is required for new construction and alterations, but it still must ensure that a person with a disability has equal use and enjoyment of the premises to the extent that such modifications are within the financial means of the facility owner.  Small business owners are entitled to a yearly disability access tax credit to improve accessibility, and should take advantage of this benefit to ensure that everyone has the ability to be a part of the community.