Some children with autism, developmental or intellectual disabilities may wander off without any comprehension of possible danger.  This might include running off from adults at school or in the community, leaving the classroom without permission, or leaving the house when the family is not looking. While most children are drawn to water, many autistic children seem even more fascinated by it — and they’re also fearless.

On April 29, 2012, Hannah Sackman, a seven year old Autistic little girl drowned when she eloped from a housing development at military housing in Fort Gordon.  When Hannah’s mother was concerned with the size of the fens and the locking mechanism of the fence, she asked the management company if she could install additional locks on the doors that were higher up and out of Hannah’s reach. The house had three exterior doors and all of them had a locking mechanism on the knob and a dead-bolt – both of which could be unlocked from the inside with a simple twist and without using a key and Hannah’s mother was concerned she would figure out how to open them. In response to her request, the management said, “no, it was against policy” and would damage the doors. In 2013, Hannah’s parents sued the housing manager under the Fair Housing Act for the death of their daughter, and the case settled for an undisclosed amount in 2015.

What happened to Hannah Sackman is not unique, and the Fair Housing Act requires housing providers allow persons with disabilities or those associated with them to modify the premises if the modification is necessary for the person with a disability, and is done at the expense of the person with a disability.  For residents of public housing or other housing that is federally funded, the modifications must be done at the expense of the housing provider.  These modifications can be as simple as a lock on a front door, or grab bars in a shower; or as complicated or expensive, such as a pool lift, or installing ramps or sidewalks.

Kim Johnson came to Disability Independence Group because she was afraid to live in a home that would not be safe for her daughter.  Kalia is a 10 year old girl who lives with Fabry disease, which is a rare genetic disorder.  Along with a developmental disability, Kalia  also suffers from episodes of pain, is legally blind, hard of hearing, and problems with her gastrointestinal system and a cecostomy.  She requires twice daily flushing of her stoma which takes hours and hours of time.  Kalia is a runner, and whenever she has a chance, she tries to escape.  She knows how to unlock doors and turn handles.

In March of 2016, Kim was looking for a new rental home in Largo, Florida and found 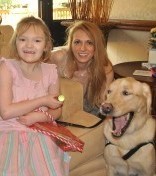 perfect home.  During the showing of the home and throughout the leasing process, Kim and Kim’s Mother, Donna, spoke with the leasing agent, and explained how urgent it was that they move and the needs of Kalia’s disability.  Then, with the help of Donna, Kim entered a lease for the home.    After signing the lease, the leasing agent, instructed Kim on the use of the front door lock.  At that time, Kim said that she would need to install a chain lock on the door to keep Kalia inside since she has a tendency to elope.  As with Hanna Sackman’s mother, Kim was concerned with the locking mechanism and wanted a mechanism that was higher up and out of Hannah’s reach.

The leasing agent refused.  Kim explained that a that the chain lock was the most reasonable modification asserted her rights under the Fair Housing Act, in order for her daughter …”to be able to have an equal opportunity to have safe access to the majority of the home.”  The leasing agent and owner refused to allow Kim to install a higher locking mechanism, as they believed that a chain on the door would damage the door.  Then the lessor refused to return the money Kim spent on the home, and refused to allow her to find another home that would be suitable for Kim and her daughter.

Adding a chain lock to the front door is the most reasonable, most effective modification given K.J.’s disability.  The chain-lock modification is the most reasonable modification because the chain lock would be out of K.J.’s reach and would successful prevent K.J. from eloping. Pursuant to HUD’s guidance, adding a chain-lock to the front door is necessary because the other suggested modifications will not be effective.  By denying Kim and her daughter Kalia an accommodation, this landlord denied them a safe home, solely due to Kalia’s disability.

[1] Joint Statement of the Department of Housing and Urban Development and the Department of Justice: Reasonable Modifications Under the Fair Housing Act (March 5, 2008),  http://www.hud.gov/offices/fheo/disabilities/reasonable_modifications_mar08.pdf (last visited May 10, 2016).