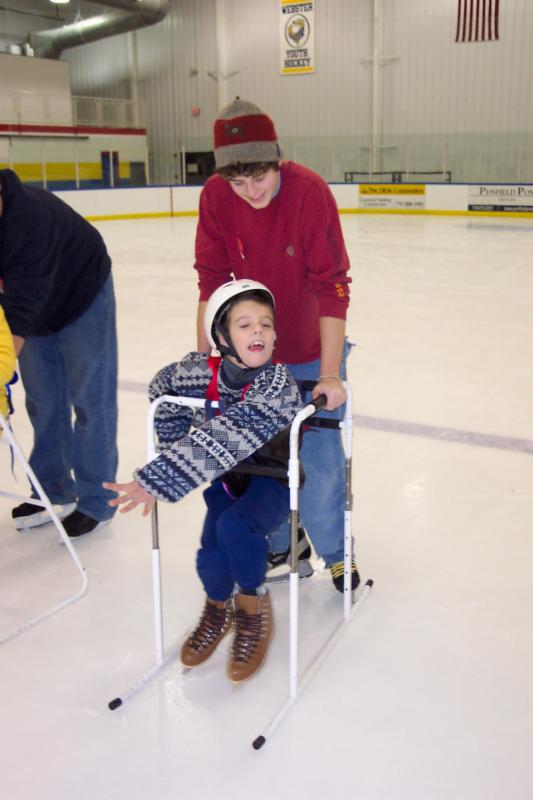 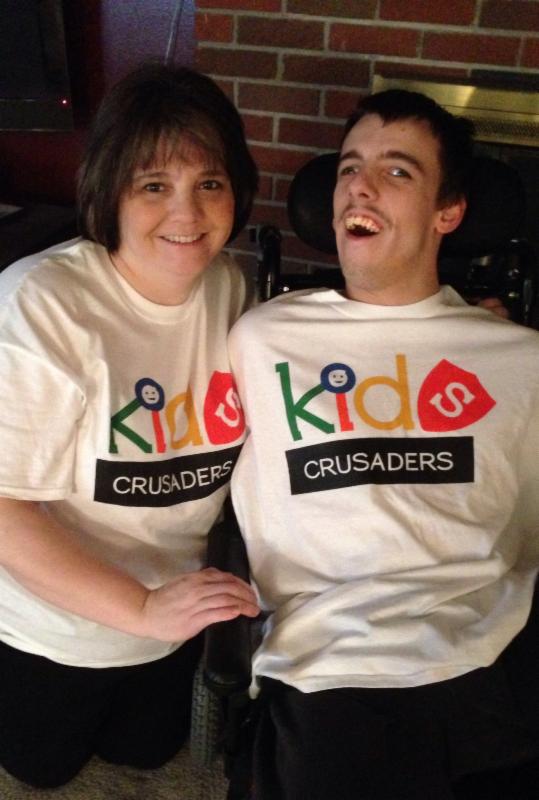 And while this list could go on forever, my all-time, far out crazy adventure would have to be the year I enrolled Nick in the Sabah ice skating program. Their mission “is to challenge individuals with special needs and volunteer partners to experience the success, pride, freedom and joy of therapeutic ice-skating while achieving personal growth.” Sounded good to me. My sauntering husband however said “are you crazy? You are going to put razor blades on this kid that can’t walk and expect him to actually ice-skate?” Absolutely. Their web site said so. Period.
So off we went. We put the (very sharp) ice skates on him as he sat in his wheelchair. I put on a pair of skates (first time in over 20 years) and met our personal volunteer partner, who happened to be a rather husky hockey player. Together we lifted Nick out of his wheelchair and got him to the edge of the ice. Our volunteer asked me how well I could skate and my reply was “I grew up on the ice”, which was basically true. However, at the age of 8 or 9 ice-skating was easy and you are much closer to the ground when you fall than when you are an adult. Lessons are always learned the hard way for me. We stepped onto the ice, one on each side of Nick supporting him, and wham. I fell first, total wipe out. Bringing Nick down on top of me with his VERY SHARP ice skates and Hockey man on top of Nick. I think I heard him mumble something along the lines of “oh joy, this should be fun”. We eventually got better (I learned how to hang onto the wall and Nick at the same time) and then graduated to a special sling seat walker device that allowed Nick’s feet to be on the ice and Hockey man free to race him around the rink at ridiculous rates of speed (perhaps the freedom from the falling down mom) and the pure joy on Nick’s face. One season was enough. It was worth the blood and the Band-Aids to see Nick smile. No regrets.
I think the point that I’m trying to make is that it is not easy to adapt everything, but it is not impossible. I am glad I wasn’t afraid to try and I am grateful for people that supported my efforts. Would it have been easier to have
just stayed within the safety and comfort zone of our home? Absolutely, but I wouldn’t trade these memories for the world. As long as I am given a new day, I will continue to seek out new adventures for Nick to fully enjoy this beautiful world that we live in.
“All children with special needs just need a little help, a little hope, and someone who believes in them.” (A Very Special Needs Resource)

Until next month, live each day with laughter and love. And always remember, you are not alone on your journey!