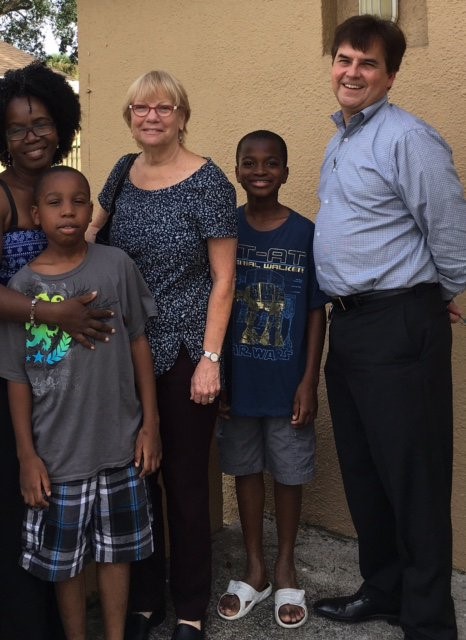 Today, Roseline Joseph welcomed Coral Gables Police Lieutenant Bart Barta to her home and received $300 in gift cards as a holiday gift from the City of Coral Gables Police Department.  Ms. Joseph was just granted custody of her grandson, who is a medically-fragile three year old with a disability, and requires 24-hour per day medical care and supervision.   This little boy has been in foster care and in skilled nursing facilities since he was an infant.  Instead of presents in Ms. Joseph’s home, it was filled with medical supplies and equipment awaiting the return (at 4 P.M.) of the best present that Ms. Joseph could hope for.  Sharon Langer, guardian ad litem for the child and Development Director of Disability Independence Group, is overjoyed at the reunification of the family and another child out of a nursing facility to a forever home.

Ms. Joseph’s gift was made possible by a  long-standing member of the Coral Gables community, who wished to remain anonymous.  This Santa Claus gave the Coral Gables police department  gift cards  to be distributed in and around the city during holiday weeks, and to  victims’ homes, families in need and to others facing times of hardship.