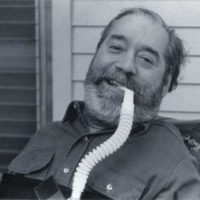 Roberts contracted polio at the age of fourteen in 1953.  He slept in an iron lung, and was forced to swallow air using facial and neck muscles during the day.  He fought to graduate from High School, and was the first wheelchair user who attended the University of California at Berkeley in 1962.  At first, Berkeley refused to accommodate him, but he persevered, and brought his 800 pound iron lung and Berkeley converted a floor of the hospital into a dorm.

After Ed Robert’s blazed the way, a dozen disabled students followed his lead, and moved into the old hospital ward.  Berkeley was a hotbed of political activism, including protests for women’s rights and free speech and against the Vietnam war, and Ed Roberts questioned and fought for disability independence.  Ed Roberts and his friends were called “The Rolling Quads,” and Roberts was their leader.  They protested and fought for the campus to become more accessible and to fund support services so that they could attend classes while living independently.  When interviewed about his experiences,  Ed Roberts said:

Before I was the Rehab director, I went to Berkeley. When I first began talking with the administration, they told me, “We tried cripples,  and they don’t work.” I was adamant about going there. It was 1964 – I had to sue them to get in; the same semester James Meredith was escorted into an all-white classroom, I was rolling into a Berkeley classroom.

They didn’t know where to put me. The dorms weren’t accessible, and we had to find a place that would accommodate my 800 pound iron lung. They finally decided that I could live in a certain ward of Cowell on the edge of campus. Soon there were a bunch of us crips at Berkeley. It was an exciting time. The protests and student movements were rising all around us, and we were right there. John Hessler and I used to roll right up to the front of the demonstrations and stare down the police. What could they do? When they threatened to arrest us, we just asked them, “How are you going to get us there? Do you have an iron lung in your prison?” That’s one drawback of the ADA,  I guess, because they didn’t have accessible jails back then, which meant they didn’t arrest us.[i]

Ed Roberts continued his advocacy and became the Director of the California Department of Vocational Rehabilitation and later co-founded the World Institute on Disability. is ac

His activism and eloquence were crucial in later protests and the enactment of regulations under the Rehabilitation Act and the Americans with Disabilities Act.

Ed Roberts died on March 14, 1995, at the age of 56.  His memory and activism continues to live in each protest for disability rights and independent living.