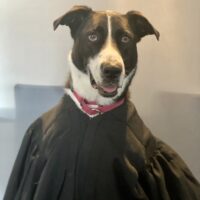 Since its inception in 2002, Disability Independence Group has been active in enhancing options for persons with disabilities to benefit from the assistance and companionship of animals. Our advocacy ranges from ensuring that service animals and emotional support animals are permitted in housing and employment to embedding therapy animals in social services agencies that serve abused children.  With increased recognition of the beneficial use of assistance animals, there has been increased regulation in the use of assistance animals.

Luckily, the recognition of the benefits of animals is mostly bipartisan, and the Florida Legislature has attempted to guide and facilitate the use of animals for both the benefit of those who need the assistance, but also for the welfare of the animals themselves.  This year’s bills in the Florida Legislature are examples of what can and should be done to facilitate the human-animal bond.

My favorite bill, by far, is SB 96, which incorporates investigating and reporting animal abuse into the central child abuse hotline.  Senators Book and Brodeur have been consistently champions when it comes to the intersection between vulnerable children and animals.  According to the legislative intent of the statute –

The Legislature recognizes that animal cruelty of any kind is a type of interpersonal violence that often co-occurs with child abuse and other forms of family violence, including elder abuse and domestic violence. Early identification of animal cruelty is an important tool in safeguarding children from abuse and neglect, providing needed support to families, and protecting animals.

This bill requires the cross reporting between child and animal abuse as well as the training of child protective officers to investigate the treatment of the animal in the scope of a child abuse investigation.  This findings and requirements of this bill are in line with the findings and recommendations of the National Link Coalition that after 35 years developed a resource and data demonstrating significant correlations between animal abuse, child abuse and neglect, domestic violence, elder abuse and other forms of violence.  This new law is a perfect complement to subsection § 741.30(5)(a) which was enacted in 2020, that allowed a court to award temporary custody of a family pet to petitioner when either a temporary or final injunction for protection against domestic violence is issued. This section also allowed a court to issue a no contact order with the animal.  Similar to SB 96, HB 47/ SB 216 requires veterinarians to report suspected animal cruelty. Such a requirement protects animals, but also such abuse may uncover abuse of others in the household.

A close second is SB 1328, another fantastic bill by Sen. Lauren Book. This bill permits the use of therapy dogs to assist witnesses to testify in court, and it also provides minors or persons with intellectual disabilities additional protection during court appearances.  From a disability standpoint, I do believe that the failure to define “intellectual disability” and the failure to include developmental disabilities is an error.  However, in my own opinion, any court has the discretion to provide a protective order to protect a litigant or witness when any good cause is demonstrated, such as a developmental disability.

As the immediate past president of the Florida Bar Animal Law Section, I was particularly pleased to find the legislative stamp of approval for our section in Senator Jason Pizzo’s Bill, SB 1316: and Rep. Sam Killebrew’s Bill , HB 1003 – Courtroom Animal Advocates. This bill allows a court to appoint an advocate for the interests of an animal in certain court proceedings and it requires the Animal Law Section of The Florida Bar to maintain a list of attorneys and certified legal interns meeting specified requirements who are eligible to be appointed as an advocate.  When I retire – this will become my full-time avocation!!!

A no-brainer bill that is in the legislature is SB 1370/ HB 911 which authorizing veterinarians to practice veterinary telemedicine.  Travel to and waiting for an in-person appointment is a barrier for persons with disabilities.  Furthermore, these barriers prevent those with disabilities or without disabilities from getting treatment for an animal’s minor ailments that could be easily identified or treated remotely.

Tethering dogs or cats in inclement weather or when their owners are not around is just cruel and neglect, and congrats for Sen Taddeo, Book, Rouston, and many others, as well as Rep. Slosberg for moving to bar this practice.

SB 1138/HB45 attempts to prohibit the retail sale of dogs and cats in pet stores. Most pet store puppies come from puppy mills.  Most responsible breeders do not sell their puppies to pet stores and a majority of national breeding code of ethics prohibit or discourage their members from selling to pet stores. Many of these puppy mills treat the “breeders” with inhumane methods and many of the resulting offspring have physical or psychological issues.   According to the Humane Society director Kate MacFall, “Florida residents should see H.B. 45 as a humanitarian measure needed to protect consumers and safeguard animal welfare for the long term. Through our public policy and pet acquisition choices, we can replace Florida’s yearly importation of thousands of puppy mill puppies with a shift in the pet market, one that relies on more humane sources like shelters, rescues and responsible breeders who sell directly to the public and never through pet stores.”