I have been an active participant, advocate, and lawyer in the Disability Rights movement for the past twenty years, so I am always excited to hear new views or learn new skills.  Last week, Debbie and I attended the Ruderman Inclusion Summit in Boston where we had the opportunity to meet with about 1,200 advocates from all sectors of the disability community and their allies.  The Summit was convened by the  Ruderman Family Foundation, which focuses its philanthropy and work on Disability and Jewish life. Unlike my normal legal community involvement (non-stop conversations about legal issues), a variety of topics were discussed, including the media, Hollywood, employment, globalism, and religion and culture

The experience took me out of my comfort zone and I met a whole group of new people.  However, there are issues that have stuck in my mind from the Summit, and opened my jaded eyes a bit wider.

The Ruderman summit had three celebrity Deaf guests: Emmy Award winning actress, Marlee Matlin; Model/Dancer, Nyle DiMarco; and singer, Mandy Harvey.  Each had a unique view of what it means to be a Deaf person in a hearing society and each embodied the importance and pride of 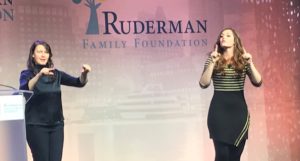 See the video of Mandy Harvey’s speech at the Closing Plenary. Her speech and two songs start at 1:02:40 –

being a member of the Deaf Community.  As an attorney who represents members of the Deaf community, I learned early on about the history and importance of Deaf culture and how beautiful ASL is as an expression of the language and identity.  Still, Mandy Harvey blew me away.  I have never heard a person describe so eloquently the journey of becoming deaf and then becoming a proud member of the Deaf linguistic and cultural community.

I have to admit something that I am a bit embarrassed about.  When I first heard of Ms. Harvey, I envisioned one of my deaf clients asked to eschew their language, and rely on speech and lip reading.  This is one of the horrors that the Deaf community has fought against for years.  But, Mandy Harvey sings because she wanted to be a music teacher, and she wanted to sing, and people told her she could not—because she was deaf.  She can. 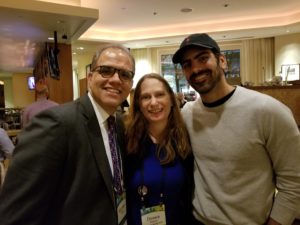 Another thing that I am embarrassed about… I was sitting in the hotel bar with Debbie, and we saw Nyle DiMarco signing with a person who we thought was a model.  So we wanted to take a picture with Nyle, and we did not realize that the person who we thought was a model was Mandy Harvey!  We were so excited; I could hardly even fingerspell, so Mandy Harvey was nice enough to take a picture of Debbie and me with Nyle.  If I ever see her again, I’d love to have a picture with her …maybe…

Growing up Jewish, my family’s Tzedakah, charity, always equated to donations.  Furthermore, in my South Florida community, integration does not seem like a priority.   Throughout the Jewish community, there are still segregated camps and schools with programs called “Tiqvah” or “Hope” and accommodations for persons with disabilities are not often solicited nor promoted.  A Deaf friend of mine was even discouraged from being active in Jewish life.

Tzedek and Tikkun Olam (“repairing the world”) took a form that I was not used to growing up, where instead of solely funding social justice for others, social justice begins with activism at home and in one’s community to ensure that persons with disabilities are included. This should not be new or different.  It is a fundamental tenet that we are all made in the image of God—B’tzelem Elohim—and as such each person, able-bodied or disabled, is entitled to equal respect and dignity.

In the Housing breakout session, Eric Rosenthal of Disability Rights International spoke on the lack of assistance to families with children with disabilities, which is causing children to be abandoned into orphanages.  I learned that many children surrendered into orphanages often become disabled, and these and other children also become subjects of human trafficking. Philanthropic support these orphanages around the world further encourages the cycle of child abandonment.  As such, we need to contribute to organizations that promote family reunification as well as services for these families.

In the United States, the plight of many families with children with disabilities, or even parents with disabilities, is similar.  Since 2011, Disability Independence Group has represented parents of medically complex children who were denied home-based care and were forced to make the decision to place their children in nursing homes.  While the State of Florida paid more money to house and care for these kids in nursing homes, it refused provide the same resources for families to remain together in their own homes.  For parents with disabilities, children can be removed by the State and placed in foster care or group homes when parents are not provided with sufficient resources for their own or their child’s disability.  While the Americans with Disabilities Act should ensure that parents are provided with adequate services to prevent removal or institutionalization of children, in reality, it does not.  Unfortunately, we have more in common with third-world countries that abandon children in orphanages than we could image.

I always thought that the United States was so advanced when it comes to employment of Persons with Disabilities, notwithstanding our continued unemployment rate of 70%.  I learned from Guilherme Braga, CEO of Egalitê Recursos Humanos Especiais, that Brazil has a required quota of workers that must be persons with disabilities.  Brazil is not alone.  Other countries that impose quotas include France, Germany, Israel, China, Italy, the Netherlands, Russia, South Korea, Taiwan, and the Ukraine.

When quotas are imposed, most companies view the it as a floor and make affirmative efforts to hire qualified persons with disabilities, which encourages a culture that embraces differences, and allows the corporation to have a broader skilled talent pool.

In the employment breakout session, Nadine Vogel, of Springboard Consulting, said, “Diversity is being invited to the party; inclusion is being asked to dance.”  The different views of the participants of the Summit and the many persons with disabilities who were a part of the conference demonstrated the work we must continue to do in order to achieve full inclusion in our society.  For example, in the Disability in the Media breakout session, the panelist did not realize that during the holiday season, the rendition of persons with disabilities in the media transform into the stereotypical crippled Tiny Tim, or the miracle of the person who “overcame” their disability. Furthermore, in the plenary sessions, we heard how our elected officials care about persons with disabilities; however, this care does not translate into resources required to ensure inclusion of persons with disabilities into our communities on an equitable basis.   As such, I believe that anyone who was a participant learned something, and most, like me, gained insight from others with different views of disability and inclusion.