Katy Daniel-Rivera is a Deaf woman who lives in Florida, and works at the Bay Pines Veterans Administration (“VA”) Hospital as a Radiology Medical Support Assistant in the Imaging Service Department. After receiving many positive performance reviews over her three years at the VA, Katy sought to advance her career by becoming licensed by the State of Florida in Radiologic Technology. As a Deaf woman, Katy has been successful in her chosen career and has had sign language interpreters or other services through all of her education and other licensing opportunities.

As Katy began researching programs in 2014, Keiser University had reached out to Katy and told her what a good match she would be for the University and its program in Radiologic Technology. Keiser University has an enrollment of over 20,000 students and earns over 300 million dollars in revenue per year. Its main campus is in Fort Lauderdale, with fifteen additional branches located in other parts of Florida.

After finding out about the program, Katy wanted to meet personally with the admission 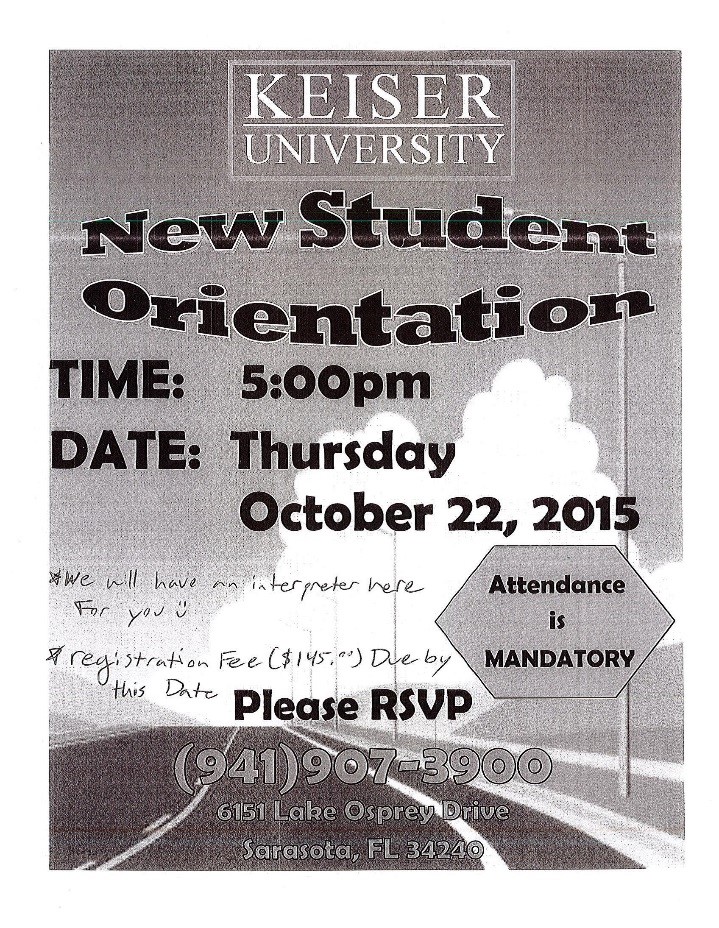 counselor to discuss the assessment test and the program, and requested a sign language interpreter for the meeting. The counselor denied her request, but assured her that Keiser
would provide accommodations once she was admitted. Over a twelve-month period, Katy had numerous meetings about the accommodations she needed, but was not provided an interpreter for any of them. On September 29, 2015, Keiser accepted Katy into the Radiologic Technology Program and told her to show up at orientation on October 22nd, where they finally would provide an interpreter. At the orientation Katy was handed a letter from the Office of the Chancellor of Keiser rejecting her from the Keiser program because she is deaf, claiming that she posed a safety risk to others and that providing interpreters would be “inordinately expensive and extremely difficult to maintain.” Katy was crushed.

On January 7, 2016, National Association of the Deaf Law and Advocacy Center, and Miami-based Disability Independence Group filed suit on behalf of Ms. Daniel-Rivera. Keiser’s reasons for rejecting Katy Daniel-Rivera were based on stereotypes and out-moded beliefs and not on the actual capabilities of Ms. Daniel-Rivera. She has been successfully practicing in this field for several years, not once compromising other’s safety because she is deaf. Further, numerous ASL-using deaf and hard of hearing individuals have successfully trained for and performed healthcare jobs that exceed the demands of Radiologic Technology. For example, ASL-using deaf individuals currently or previously have worked as pediatricians, and as hospitalists in teaching hospitals. Regarding expense, universities routinely provide sign language interpreters for all programs or services, as required by law. Indeed, Keiser accepts tens of millions of dollars of federal financial assistance each year conditioned on a promise to provide interpreters when needed.

Katy Daniel-Rivera would like the opportunity to succeed in her chosen career and earn a license to be a Radiologic Technologist. With appropriate auxiliary aids and services, a person who is Deaf can perform any job. To deny a person that opportunity is discrimination.