aT4 Program: A Glance at the Past and Present

This summer, I had an incredible opportunity to spend a month abroad in Berlin, Germany. As such a historically significant city, I made it a priority to tour as many museums and monuments as possible. While planning for the trip, I did a lot of research about the various memorials and was surprised to learn that people with disabilities were the first to be targeted by the Nazi regime and the last to receive a monument recognizing their history.

I dug deeper into the history of the victims and was horrified by what I discovered. In January of 1940, doctors began to meet at a central office at Tiergartenstraße 4 (where the memorial site is now located.) Within those walls, doctors determined who would be targeted based on “usefulness” and ability to contribute to the work force. Those selected would be subject to forced sterilizations or euthanasia. People with intellectual disabilities were the first to be targeted by this Nazi program, known as the T4 Program.

Roughly 70,000 people with disabilities were forcefully euthanized in one of six specially designated T4 centers. Parents were often deceived and told that their children were being sent to improved treatment centers, but in reality were sent to one of these centers. False death certificates were created and families often never found out what happened to their loved ones. While the program officially ended in Germany in 1941, it secretly continued in occupied territories afterward through food deprivation and drug overdoses. Officials now say that there have been more than 300,000 victims of this program across Europe.

Disability advocates fought vehemently for this gruesome history to be rightfully recognized. However, it wasn’t until November of 2011 that the German Parliament agreed to erect the memorial. For years, the site at Tiergartenstraße 4 was simply a bus stop with a plaque describing the horrors that had taken place years before. The memorial was recently completed in September of 2014 and I was fortunate enough to visit it.

The monument consists of a gorgeous 79-foot long bright blue glass wall. Parallel to the glass wall, there is a long counter with information about the T4 program, biographies of the victims and the doctors involved in the planning. I was pleasantly surprised by how accessible the memorial is for various types of disabilities. All the information provided is written with simple language in order to be understood easily. There is also plenty of information transcribed into braille. Multimedia displays offer interpreted videos in sign language for people who are deaf, as well as audio for people with visual impairments. The ground also has a path to follow to accompany the length of the memorial. The surrounding area has been made to be accessible for wheelchair users as well.
I think it’s essential to remember that the victims of the T4 program 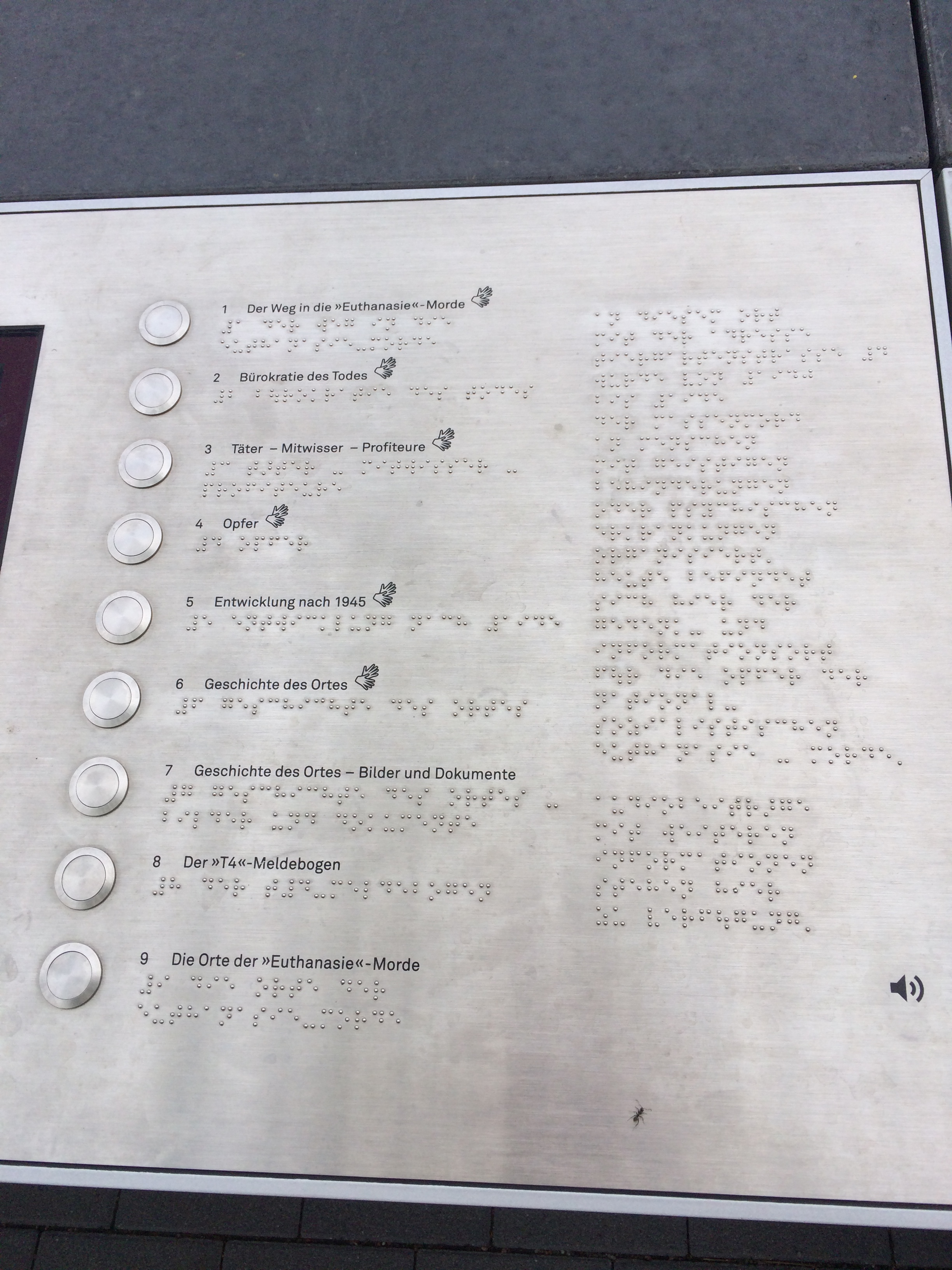 were the last to have their story recognized and given their rightful memorial. Few of the doctors that participated in the program were ever brought to justice and family members of victims are still fighting for compensation. In spite of this, I am hopeful for the future of disability advocacy in Europe. Throughout my time there, I found small-scale models of monuments labeled with braille in every city, wheelchair accessible swings, and accessible transportation, parks, and museums. The trip was an eye-opening experience and I gained a lot of new perspectives and information that I hope to carry with me for all my future endeavors.